Data Suggests We Still Have a Long Way To Go

A quick scan of this morning's news shows we have a long way to go in the fight against prescription opioid misuse and abuse.

From a survey conducted by the National Safety Council we learned that:

And from a study entitled "Adherence to Prescription Opioid Monitoring Guidelines Among Residents and Attending Physicians in the Primary Care Setting" reported on by workcompcentral this morning, we learned that:

So once more unto the breach, dear friends, once more.  Another week in the battle against prescription drug abuse.  Lots of work to do.

Very little good has ever come from judges attempting to interpret legislative intent in the face of disputed medical treatment.

Barbara Shepard injured her back, neck, and left shoulder in 2005 while employed with the Oklahoma Department of corrections.  The OK Work Comp Court ordered that the carrier pay for treatment, inclusive of office visits and (you guessed it) pain management medications.  "This provision," stated the order, "shall be reviewed by the Court upon application of either party for good cause shown."

Turns out evolving contemporary medical evidence and the risks of opioid medications do not amount to "good cause."

Despite Oklahoma's adoption of the Official Disability Guidelines as of March 1, 2012, the Court found that those guidelines do not retrospectively apply to Shepard's case.  Simply because of the date on which she was injured, Shepard is subject to a different (and, frankly, inferior) standard of care.   While physicians on both sides of the dispute agree that the guidelines indicate she should not receive the pain management medications she has been taking, the Court instead relied on a purely legal framework to make its decision.  Thus, not only has the Court failed to contemplate the growing body of medical knowledge from which the patient could benefit, but it has also created two standards of medical care for Oklahoma work comp patients that depends entirely on one's date of injury.

Let's consider an admittedly controversial analogy: Instead of being injured in 2005, let's pretend for a moment that Shepard was hurt in 1917.  And instead of an injured back, she had a work-induced cough.  During this time, she might have been prescribed a popular cough suppressant manufactured and sold by Bayer pharmaceuticals.  The chemical compound was diacetylmorphine, but it was marketed under its trade name: heroin.

Seven years later, in 1924, in the face of a public health crisis and mounting evidence of heroin's harmful properties, Congress passed the Heroin Act, which outlawed the sale, importation, and even the manufacture of heroin.

According to the Oklahoma Supreme Court, however, Shepard should still get heroin for her cough... despite the evolving medical evidence and the statutory support for recognizing that medical evidence, Shepard should still get her heroin, simply because she developed her cough seven years before we knew that heroin was more likely to harm her than help her.

Opioids, thankfully, are not illegal.  There are many patients, particularly the terminally ill, that benefit greatly from these medications.  But it's also true that we didn't know in 2005 everything we now know about opioids in the treatment of chronic, non-cancer pain.  For instance, in 2005, the National Safety Council had yet to publish this informative graphic: 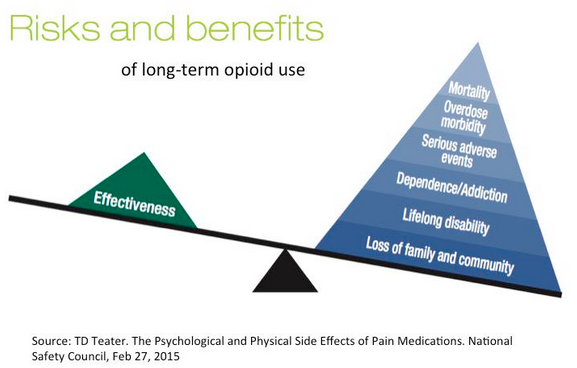 We cannot create a sustainable system of medical care for injured workers that does not allow for the incorporation of the best available medical evidence.