Keep an Eye on the Tramadol: A Global Perspective

First and foremost, John Oliver covered the opioid crisis on his HBO show Last Week Tonight and it's must-watch for anyone who deals with this issue on a daily basis:

But John Oliver, perhaps the only guy who can make opioids funny (satire really is the very soul of wit), only covered the issue from a US perspective.  The Wall Street Journal published an article last week about the global rise of tramadol abuse. I follow the opioid epidemic pretty closely, both in the US and abroad, but this phenomenon caught me off guard.  Here are a few facts that pertain to our view of tramadol here in the US:
This drug is tearing communities apart in West Africa, the Middle East, and parts of Eastern Europe in much the same way that opioids and heroin have torn apart communities here in the US.  The drug isn't tightly regulated by the UN or WHO (largely due to the lack of hard data on abuse and the conflicting science outlined above).  India, the world's leading manufacturer of generic drugs, is cranking this stuff out and shipping into countries by the boatload, fueling a epidemic of addiction that has outstripped the ability of medical personnel and the law enforcement to combat it.

Even now, in the US, I've been in conversations with clinicians and claims professionals about whether or not tramadol is even an opioid.  It's a synthetic drug, entirely man-made.  And the symptoms of tramadol overdose do differ from a traditional opioids - rather than respiratory depression, tramadol overdose tends to lead to seizures and sudden collapse.  So are there differences between tramadol and other opioids?  Yes.

But let's straighten this out once and for all:
Keep an eye on the tramadol and don't fall for the "it's not as bad as the opioid" line.

Michael
On Twitter @PRIUM1
Posted by PRIUM at 1:13 PM No comments:

Much has been said and written on the topic of the recent report from the US Department of Labor regarding the supposed inadequacy of the workers' compensation system.  Critics rightly point out that the report appears to reduce its own credibility by failing to exhibit a sufficient understanding of the system, by assuming that all people claiming to be disabled are actually disabled, and by frightening those who believe that the federal government's involvement in any endeavor dooms all of planet Earth to utter destruction.

To paraphrase Twain, though, reports of the death of the state-based work comp system have been greatly exaggerated.

Nevertheless, those who dismiss this report based solely on its well-deserved criticism are clearly missing the broader picture.  There is a fundamental problem in this country with disability management and the public safety net that supports it.  And when the public safety net is perceived as inadequate, the most politically expedient solutions are to neither generate revenue (i.e., raise taxes) nor to reduce expenses (i.e., cut benefits); rather, the first solution is to look for an exogenous entity to blame and from which, if luck prevails, to extract rent.  In this case, the federal government has found at least one scapegoat: workers' compensation.

And not without cause, mind you.  The relationship between work comp and Social Security Disability Insurance (SSDI) is ill-defined, but we know from an analysis of past and present "off-set payments" (wherein an individual receives payment from both work comp and SSDI) that of those currently receiving SSDI, a little over 12% of them have also received work comp payments.  While those payments are material (on the order of perhaps $10 billion of the total SSDI spend of $145 billion), this analysis fails to address the larger issue: how many SSDI recipients could have filed a work comp claim, but never did?  That's a much bigger number.

One alarming, but nonetheless informative, statistic regarding the SSDI population showed up in the May 2016 edition of Health Affairs.  If you've heard me speak on a blogger panel this summer or fall, you've heard me talk about this.  The graph below shows spending on opioids by the Medicare and Medicaid programs between 1999 and 2012.  The purple line should jump out at you... it represents opioid spending for the Medicare population that is under 65 years of age. 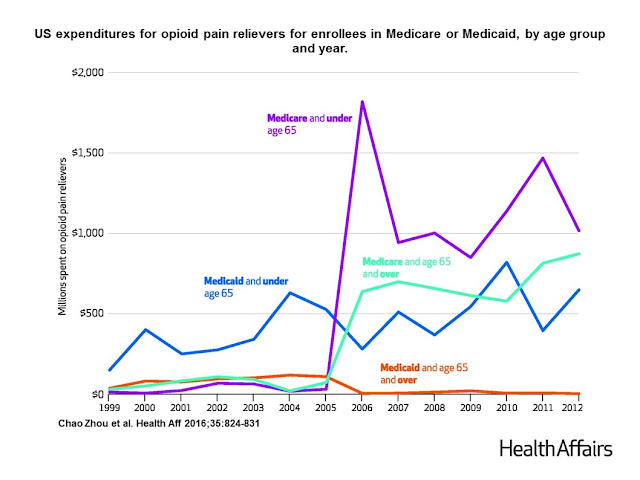 This is effectively the SSDI population (disabled people under 65 receive indemnity payments from SSDI and healthcare coverage from Medicare) and we're spending more than $1 billion of tax dollars per year on their opioids.  This group is about one-fifth the size of the over 65 cohort, yet we're spending more on opioids for them.  On a per person basis, opioid spend for those over 65 is $192 per year.  For the 45-65 cohort covered by Medicare (an approximation for SSDI), it's $683 per year... or nearly 4X more.  Interestingly, the opioid spend covered by private insurers for those aged 45-64 is $274/year and for Medicaid it's $251/year.

So what the heck is wrong with the Medicare group aged 45-64?  They're disabled, that's what's wrong.  And there's the rub.  If you think it's difficult to track, measure, manage, and mitigate opioid use in work comp, it's comparably impossible today within the SSDI population.

A broken disability safety net is a dangerous political phenomenon - one we should take seriously and treat with the respect it deserves.

The Guts to Buck the Lobbyists

Ohio has proposed something novel: Let's not pay for expensive naloxone prescriptions and instead invest resources in ensuring the delivery of appropriate medical care and provide help for those struggling with dependence and addiction.

Instead, BWC has put controls in place to ensure that reimbursement for opioid medications is limited to instances in which best practices are being followed.  And they're willing to pay for treatment for opioid dependence for up to 18 months, including two failed attempts at recovery.

So here we have a state significantly curtailing opioid use, providing a cost-effective version of an overdose antidote, and paying for opioid dependence treatment where necessary.

Before you dismiss Ohio's efforts as impractical in a non-monopolistic state, take a step back and ask yourself whether this isn't a rational, measured, clinically responsible series of measures that will actually promote injured worker health, wellness, and recovery?  If it is, then why isn't it practical in your state?

I think Johnnie Hanna, pharmacy program director at BWC, summed it up: "If they've got the guts to buck the lobbyists... they can get these things done."

It is said that discretion is the better part of valor.  Except, I would suggest, when it's not.  Why aren't you doing these things in your state?

Do you have the guts?

Michael
On Twitter @PRIUM1
Posted by PRIUM at 9:42 AM No comments: