It's Actually NOT 10% of Doctors Driving the Opioid Epidemic

A brief research letter in the Journal of the American Medical Association published just yesterday highlights a fascinating phenomenon in opioid prescribing and does so against the backdrop of workers' compensation data from the California Workers' Compensation Institute (CWCI).

Recall that CWCI data indicates that 10% of prescribers are responsible for nearly 80% of the opioid prescriptions in the California work comp system (and 88% of opioid costs!).  That's an astounding statistic and one that has led many observers and decision-makers to conclude that the solution to mitigating the opioid epidemic is to change the behavior of a small subset of prescribers that were driving the utilization of potentially dangerous medications.  I've heard this from a multitude of sources: "It's a relatively small group of the prescribers who are really responsible for this problem.  How do we change their prescribing behavior?"

The authors of this recent research letter decided to test whether the same ratio was exhibited in a much broader data set: all Medicare claims.  Granted, this is a data set not representative of the work comp injured worker population, but it's still an interesting question: Do we see that 10% of prescribers to Medicare patients drive 80% (or more) of the opioid prescriptions?  The answer would lend itself to opioid misuse and abuse mitigation strategies that go far beyond work comp and speak to the national effort to curb addiction and overdose deaths.  What are we aiming for?  10% of prescribers? Or a broader group? 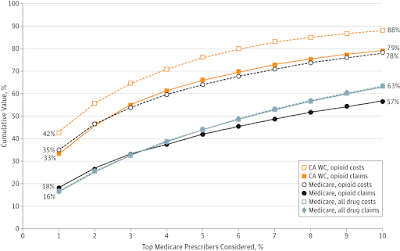 Does this mean the CWCI data is less accurate or less valuable to us?  Absolutely not.  On the contrary, the CWCI data should help focus our work comp specific strategies for opioid misuse and abuse.  But for those of us concerned with the broader, national (and, increasingly, international) issue of opioid misuse and abuse, this JAMA research letter suggests that a broader, more comprehensive set of strategies that span a wider swath of prescribers will be necessary.

Perhaps of even greater consequence is the specialty make-up of the prescribers.  The number of opioid claims in the Medicare data set are overwhelmingly from general practitioners (note that this chart is on a log scale... look at the actual numbers... family practice and internal medicine doctors are responsible for about 28 million opioid claims vs. a little over 3 million for pain management and interventional pain management combined). 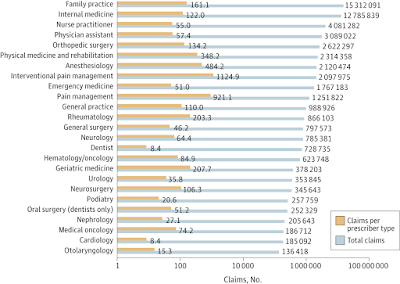 Two conclusions:
1) We need broad-based strategies to confront the opioid epidemic, though in work comp our efforts may be focused on a smaller subset of prescribers.
2) These broad efforts need to focus on education for general practitioners.  Chronic pain is fundamentally an issue of primary care and we would be wise to treat it as such.

A Sad Addition to our Shared Experiences

Interestingly, the poll reveals a demographic and socioeconomic trend around those who answered "yes" to at least one of the questions (know someone who took a drug not prescribed, know someone who has been addicted, or know someone who has died of an overdose).  The top 8 groups, by percentage of those polled answering "yes" at least once:
That paints a picture of the prescription drug misuse and abuse epidemic.

And yet, when asked to prioritize public policy goals, reducing drug abuse comes in 6th:
In studying this list... I wonder if we can't make a significant impact on #6 by tackling #2, #3, and #7. What if we thought differently about mental healthcare?  What if we thought differently about addiction?  What if we didn't treat addicts like criminals?  It's possible - and the regulatory and private enterprise infrastructure to make that happen is actually developing all around us.

The Opioid Crisis: A Playbook Arrives

The Bloomberg School of Public Health at Johns Hopkins has published a paper entitled "The Prescription Opioid Epidemic: An Evidence Based Approach." Click here for a copy. Read it. Study it. Commit its recommendations to memory.  This is an important document in the fight against prescription drug misuse and abuse.

What makes it important is its comprehensiveness. The team at Hopkins attacks the issue at every step in the drug distribution value chain: prescribing guidelines, prescription drug monitoring databases (PDMPs), pharmacy benefit managers (PBMs) and pharmacies, overdose and addiction, and community based prevention strategies.

The document is the summation of work performed by seven sub-committees that discussed, debated, and deliberated the options for addressing opioid misuse and abuse.  The committees were made up of experts in the field and the passion, commitment, and resolve of these individuals is apparent in the resulting recommendations.

Perhaps most impressive, the paper appears to leave politics aside  (as any good public health institution should) and advocates for specific tactics that have long faced strident opposition from well-funded groups. Specifically, the paper calls for mandatory prescriber education and mandatory prescriber use of PDMPs... the American Medical Association has pushed back on the former and while they've recommended the latter, many state level medical associations have balked at mandatory PDMP use.

The paper should also be commended for suggesting innovative (though controversial) ideas, such as: